Why don't he write?

I traveled to Kansas City in December to visit my brothers and sisters.  We all try to get to town at least once a year.  Brother Terry will soon be living full time in Kansas City after bilocating between there and Pagosa Springs CO for many years.   Now only brother Tom and I need to coordinate travel to get to the city we all consider "home" no matter where we live.  I did get down to Myrtle Beach twice and Marilyn spent a week visiting a friend in Florida.  More about all that later.
We were not spending money traveling but wanted to do our part to support the recovery.  So we decided to add Sister Mary Helen Lebowski, RSM, to our household.  She also goes by Daisey, which doesn't require as much explanation as her real name.  She is now eight months old, the point which trainers say they become impossible, much like human teenagers.  Honestly, she is sweet and mellow most of the time, but she certainly has her moments.  She was more of an impulse decision rather than a carefully considered one.  Otherwise, we wouldn't have gone through housebreaking in the middle of a Rochester winter.  She will complicate our future travel plans but we are so happy to have her in our household that travel complications seem a small price to pay.
Since we would be spending our winter at home, we decided to finally expand our living space by finishing the basement or more precisely half of it.  Our house is an 1800 square foot ranch with a full basement.  We were able to create a lovely space in half of it with the furnace, washing area, and typical basement storage in the other half.  This slide show gives you an idea of how it looked when it was  finished and what it looks like now.
We were fortunate to have the work done by Jerry Baylor of Home Enhancements.  He did all the work himself and completed the project in nine days.  Jerry and Sr. Mary Helen became good friends.  She was forlorn those first few days when Jerry didn't show up at 8:30.
While both of us had spaces in the house and basement to work on our individual interests, they were cramped and often invaded other spaces like our guest room.  Now we have a pleasant space in which to work and play.  I'm glad we did it when we did since we now face a major expense in replacing our roof.  If the order had been reversed, we might well have put off the basement project again.
In early March I traveled to Myrtle Beach.  Brendan and Eillen moved there last year when Brendan was named Director of Production for Ryan Homes' entry into that housing market.  Early March meant that I would get to see all three grandchildren.  Brady is finishing his freshman year at Myrtle Beach High School.  Braden is living there as she finishes her first two college years at Horry-Georgetown Technical College and will enter the teacher education program at Coastal Carolina University.  Brock is finishing his first year at Wright State University in Dayton OH.  He had an excellent first year on the soccer team and will play a key role in the future of the program.  Most importantly, he was home on spring break, so I was able to spend some time with him and hear about his plans for his academic program as well as soccer.
As if all that wasn't enough, Liam and his family were in town from Charlotte for a gymnastics meet where Eibhlin was competing.  Two of her siblings came down from UNC-Wilmington where Aidan is a junior and Marin, a freshman.  She competed well in all events.  You can check out photos of her and her fans by clicking this link.  Both families gathered for dinner.  It was great to be with them and to see the cousins interacting with each other.  I don't take credit for much but, come on, I am the common genetic factor in those handsome young people.  Click this link to see more photos of the dinner.

Once Liam et. al. returned to Charlotte and Brock went back to school, there was some baseball to see.  Brady is on the varsity team at Myrtle Beach, and I went with Brendan and Eileen to see his team play an away game.  And I mean away.  It took 1:45 to get there.  The weather was pleasant and the boys played well but for about two minutes.  Unfortunately, those two minutes gave the other team a lead that we couldn't overcome.  Unfortunately, Brady's only action was to pinch hit late in the game.
To see more photos of that game, click this link.

Two weeks later, Marilyn flew to Tampa to spend a week with Carolyn Bansbach, a longtime friend and our house/dog sitter.  Carolyn spends three to four months in Florida every year and loves not only the weather but all the activities that are available in Sun City.  For a week, Marilyn got to live the golf cart life with sun and warmth.  It was a welcome break from the dreary early Spring in the Finger Lakes.  She flew Southwest and ran into a six-hour delay on the way back.  Fortunately, most of the six hours were spent in the Tampa airport terminal.  Many other folks were not so lucky and had the unpleasant experience of spending three hours in their aircraft away from the gate.  A lightning storm in the area resulted in a ground stop and termination of all outdoor activities.  All the Southwest gates were occupied so the flights that had already left the ramp were stuck holding on the field.  Luckily, Marilyn was stuck inside the terminal.  Southwest sent her a $200 voucher for the inconvenience.  Pretty impressive!
Two weeks after that I returned to Myrtle Beach to watch Brady's team play in the Mingo Bay Classic Tournament.  This is an annual tournament played on high school fields throughout the area.  Myrtle Beach has an exemplary field both for players and spectators.

This year there were more than thirty teams, but pre-COVID there were 130 teams.  Whether it can return to those numbers is not entirely clear.  Because MBHS was a host field, I was able to see Brady play games on his home field.  Ironically, the last game I saw was against a team from Newark High School.  In an interesting twist, Brendan had played for the Newark Barge Bandits in their first year in the North Atlantic Baseball League, an unaffiliated A level league.
Click this link to see more photos.

In returning on Southwest I experienced a four hour delay and rebooking.  Instead of getting home around eleven, I didn't get to Rochester until seven.  However, for my trouble I ended up with $300 in vouchers!
While I was gone, Marilyn came down with COVID although we didn't know that right away.  The first test she took was negative, so we thought she just had a cold.  But four days later the next test was positive.  She self-isolated as best we could, and she is finally fully recovered.  I did not come down with it.  I had gotten my second booster two weeks before she became infected so I was at my maximum protection level.  Whether that was a factor not I don't know but I am thankful I did not get infected.
We are now getting ready for two more trips.  A ten-day visit to California for grandson Sam's high school graduation and niece Chloe's wedding.  Then in mid-June we travel down to Kings Point to celebrate Liam Jacob's graduation from the Merchant Marine Academy.  He will enter the Navy to complete his service obligation.  After six months of specialized schooling, he will join the crew of a nuclear submarine.
While we await those trips, I have been going out to see Grady play for the Victor High School JV baseball team.  The weather has been awful, punishing in fact, at least to the spectators.  The field at Victor has constant winds.  However, I have been treated to some good baseball both offensively and defensively.  Here's a video from a game with Grady at third.
Click here to see more photos and videos from this game.
He is also a nifty, indeed crafty, pitcher.  I like the video below because it shows him helping the umpire make the call at first.
Click here to see more photos from this game.
Hope everyone is well and staying healthy.  Peace.

Popular posts from this blog 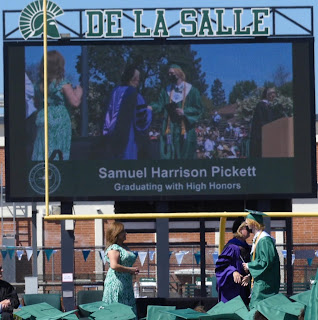 Pleasant Hill   As promised in the last blog, we traveled to California for ten days for two family celebrations, a week and 400 miles apart.  The first event was Sam's graduation from De La Salle High School in Concord CA, the next town over from Sean and Julie's home in Pleasant Hill.  Our flight out was pleasant and more or less on time.  A part had to be replaced before we could leave Dulles.  In a repeat of our experience four years ago for Sam's graduation from Christ the King School, I waited in line for an hour and half for our Dollar rental car.  That remains the price for saving $300 for a four-day rental.  Even though it was a Saturday, there were still traffic slowdowns and congestion getting to and over the Bay Bridge.  However, by 3:30 we had checked into the Residence Inn in Pleasant Hill and then headed over to see Sean, Julie, and Sam. The last time I saw Sam was for his Eagle Scout Court of Honor last fall.  Since then, he had turned eighteen, was driving
Read more